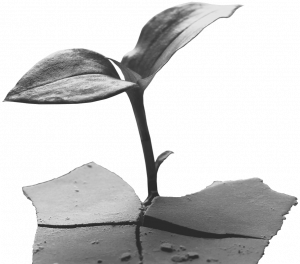 Our live debate on water scarcity highlighted the urgency of a crisis that’s literally life or death. One quarter of the world faces the threat of running out of water, a prospect that reflects not just our reliance on water for survival, but also the rise of economic insecurity, social unrest, violence and climate change. The debate raised crucial questions: What’s the best way to ensure that everyone has clean water, and whose responsibility is it — governments, individuals or institutions? Can philanthropy fix it, or is a broader structural response needed?

Three experts tackled these questions in Cape Town, South Africa, a location deeply familiar with the challenge. Last year, Cape Town confronted its own water crisis, narrowly beating Day Zero, when taps would be turned off as the water supply ran dry. Other cities face similar risks: Chennai, India; Sao Paulo, Brazil; Karachi, Pakistan; and Los Angeles, California, where water supplies are threatened. And the problem is escalating: By 2030, the areas facing high risk for extreme water stress will encompass half a billion people.

The debate speakers differed on how to solve the challenge. Yana Abu Taleb, co-director of EcoPeace Middle East in Jordan, emphasized cross-border cooperation, or “ecological peacekeeping,” in the face of crises that aren’t contained by borders or nationalities. South African activist and education advocate Obakeng Leseyane called for a wider social justice movement to improve the inequality underpinning water scarcity, highlighting the fact that there’s more than enough water in most countries to meet needs, but that water is disproportionately consumed by the wealthy, leading to shortages for people in poverty. Georgie Badiel, a model, former Miss Africa, and founder of the Georgie Badiel Foundation, called attention to the burden placed on women to gather water in water-scarce places, while many resource-rich nations turn a blind eye to the crisis that they could help solve.

A production of Qatar Foundation, the debate found common ground in the speakers’ agreement that action is urgently needed, with each debater presenting various philosophies — peacemaking, structural changes and philanthropy — as instruments for change. Moderator Ghida Fakhry asked whether scarcity is really the issue, or if that’s a smokescreen for other issues like unequal distribution and poverty. 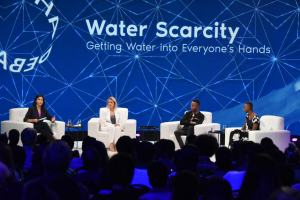 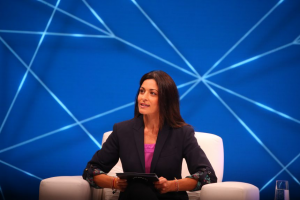 Georgie illustrated the effectiveness of philanthropic action by focusing on how the money that her foundation has brought to her home country of Burkina Faso has improved people’s lives, and their villages, by teaching women how to fix and maintain wells. Obakeng expanded the focus with a structural analysis of societal inequalities as the root cause of scarcity — scarcity for people in poverty, not wealthy people — by pointing to unequal access as the real obstacle. Yana called for working together, not just across borders, but at all levels, from governments and scientists down to the grassroots.

The debate opened with a call for cooperation from Yana, who argued that people must put aside differences to make water available for everyone. “The only way to truly resolve the water conflict is cooperation,” she said. “It isn’t easy.”

Drawing on her home of Jordan and its complicated relationship with Israel and Palestine, which all share water resources, Yana underscored the necessity of creating “models of cooperation” that can bring hostile, even combative, nations together to provide water for their people. 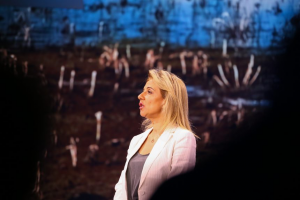 “Considering the magnitude of problems facing humanity, the only way forward is cooperation.”

Georgie focused on her home country of Burkina Faso and the enormous difference that philanthropy has made there. “There is no water crisis,” she said. “There is a money crisis.”

In four years, Georgie said, money from her foundation has brought water to more than 270,000 people. Because the expectation of gathering water falls predominantly on girls and women, teaching them to fix and maintain wells empowers them with more control over their lives. In many cases, girls and women can save hours they’d otherwise spend walking for water and use that time going to school. “This is where the money comes in. We are teaching village women to build, repair, and maintain wells in their own village.”

“It is time to trust us with the money. We will make the change. My approach is getting the money into the hands of the people on the ground—grassroots and activists.” 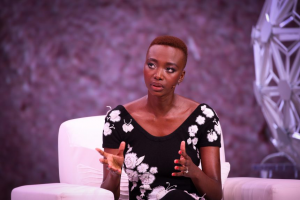 “No woman or girl should miss school to get water for their family.”

Obakeng challenged Georgie’s approach, pointing to the patriarchal society that leads to gendered expectations in the first place. We should all be fighting for gender equality, he said, and changing the system that puts the unfair burden on girls and women. Georgie answered in pragmatic terms, saying her foundation focuses on teaching girls and women because they get the work done, and that work materially improves their lives.

“There is a lot of people, especially men, who know how to install wells” in Burkina Faso, she said. But those men expect money to fix them, and if people can’t afford it, girls and women wind up walking hours to gather water. That’s why her foundation takes the practical approach of teaching women to do it themselves.

The debate turned to the question of accepting foreign aid. Obakeng pointed to the corruption and scandals in parts of Africa, where history has shown time and again that throwing money at problems doesn’t work. Foreign aid also comes with strings attached, he said, that can cause its own set of problems.

Yana said that in addition to working with people most affected by water scarcity, her organization does need foreign money: “For Jordan and Palestine, donor money is needed. The countries can’t afford to implement projects related to water and sanitation.”

Georgie expressed skepticism in the ability of Burkina Faso’s government to implement change: “What the African government has shown they can do for the people isn’t much.” It’s philanthropists — providing funds for activists at the grassroots level — who can fix the problems, she said.

Obakeng called for citizens to force their governments to listen and demand action, arguing that only a government has the structural ability to truly bring equity and water to its people. 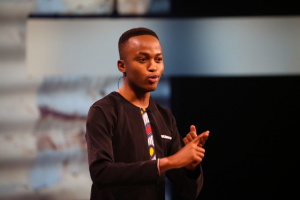 “We cannot afford to be apolitical about basic human rights the government is mandated to provide.”

The debate then turned to a new topic: Is part of the solution to water scarcity innovation? Georgie pointed to her foundation’s work partnering with universities, in both Africa and the United States, as a way to bring clean water to the world.

Obakeng had an entirely practical example to show how innovation doesn’t have to come from university classrooms: He and his roommates collected water from the shower and used it to flush toilets. “That is us saying that life depends on water, but conservation of it depends on us. Innovation does not have to be in terms of technology, but in terms of our behavior.”

Yana emphasized the importance of paying attention to each community’s needs. “There is no one proper solution for all,” she said. We need to look at “small initiatives” that happen at local levels and in rural areas. “Rainwater harvesting, decentralized solutions for treatment plants, green filters — those are very important. And then we look at big projects like the desalination projects.” 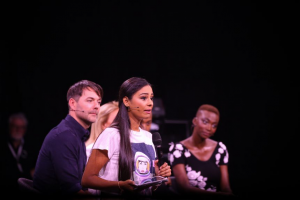 We teamed up with South Africa’s most-watched TV news network, eNCA, to ensure the debate was seen by as many people as possible across water-challenged sub-Saharan Africa. In addition to our own livestreams on Facebook, Twitter and YouTube, eNCA also livestreamed the debate on its website and social media platforms and televised the debate to viewers across southern Africa in prime time.

Livestream viewers voted on whose approach they agreed with, and asked their own questions, announced by debate correspondent Nelufar Hedayat. The tweets expanded on the conversation by pointing to the role that corporations and capitalism play in water consumption.

The majority of voters agreed with Obakeng’s position, that the problem isn’t water scarcity so much as structural injustice that results in plenty of water for the wealthy and a deficit for the poor.

Govinda Clayton, the debate’s bridge-builder and “connector,” summed up the debate and took it a step further by focusing on how the speakers’ positions could work in tandem with each other: “This focus on whether or not there’s a scarcity crisis is perhaps not important. There’s an understanding among all that there is a problem. Clearly there’s an ecosystem of different responses that each need to be taken at grassroots, national and international levels.” The strands of each speaker’s ideas, he said, form a cohesive approach. 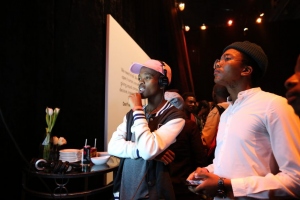 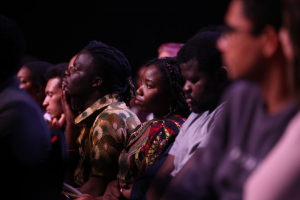 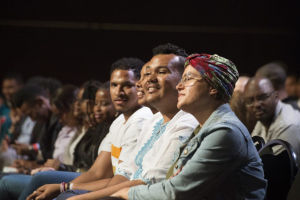 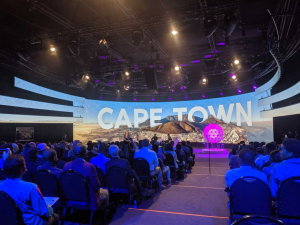 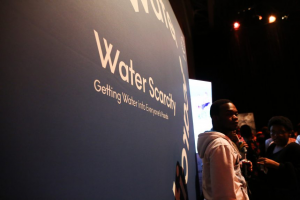 The debate ended as constructively as it began, as a conversation, not a contest, and an example of how differing approaches can overlap and work together to achieve a common goal. The debate continues right now @DohaDebates with the hashtag #DearWorld. 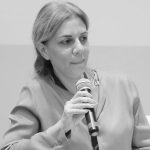 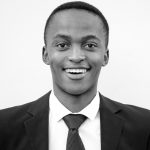 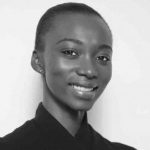