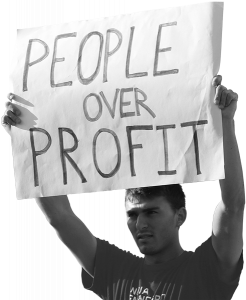 The very idea of capitalism as the only vehicle for human prosperity is facing robust challenges from many angles. As inequality soars worldwide and the planet’s sustainability grows more dire, new movements are charting alternative paths to prosperity. Our latest live debate focused on one of capitalism’s cornerstones — limitless growth — and weighed whether it can be harnessed for good or needs to be completely replaced.

The debate got heated, both in the forum and online. That’s because capitalism and its alternatives rest at the very foundation of our shared futures, and the stakes couldn’t be higher. Merriam-Webster dictionary notes that capitalism, along with its alternatives, are among the top all-time lookups, and “user comments suggest that this is because they are complex, abstract terms often used in opaque ways.” At the heart of capitalism is the concept of growth, and for people wanting to replace capitalism with a more sustainable model, “degrowth” is the direction of the future, a concept of “voluntary transition towards a just, participatory, and ecologically sustainable society.” The idea of degrowth — debated sharply onstage at Education City’s Northwestern University campus in Doha — recognizes that the economy cannot grow indefinitely and that we must consume and produce much more efficiently, accepting environmental limitations. 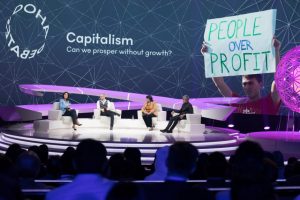 Searching for common ground was the aim of the debate, a production of Qatar Foundation, and agreement was reached in the shared call for fairer wealth redistribution and an economic model that serves everyone. But how to reach those ends stirred differing responses. Each speaker presented a vision to fix inequality and other human costs of capitalism: doing away with capitalism and moving to a post-growth society; practicing a more equitable version of capitalism driven by sustainable growth; and embracing any growth that reinvests in education, health care and other human needs.

Jason Hickel, an anthropologist and author of The Divide: A Brief Guide to Global Inequality and Its Solutions, focused on inequality and ecological economics. He argued that capitalism’s growth is a killer, the corrupt engine behind climate destruction and ecological collapse. We cannot transition fast enough at current growth rates to stop our planet’s ecological demise, he argued, pointing out that the majority of growth gets captured at the top, and the way to promote equality is to shift to a post-growth, post-capitalist economy where everyone shares abundance more fairly.

Ameenah Gurib-Fakim, the former president of Mauritius and an adviser at the Global Network for Africa’s Prosperity, defended capitalism from the practical side of how capitalistic growth transformed Mauritius into a country with greater resources for more people. She argued for an inclusive model of capitalism, an ethical version that harnesses wealth imperatives for the good of everyone.

Anand Giridharadas, a Time magazine editor and the author of Winners Take All: The Elite Charade of Changing the World, painted a picture of the stark difference between capitalism in concept and capitalism in practice. The world does not practice true capitalism, he said, pointing to big businesses’ dependence on lobbying politicians, rigging markets in businesses’ favor, and exploiting tax codes to their benefit at the expense of real competition that the capitalist model purports to incentivize. The actual debate, Anand said, centers on the relationship between business and government, with counter-pressures on every facet of capitalism to keep its players honest. 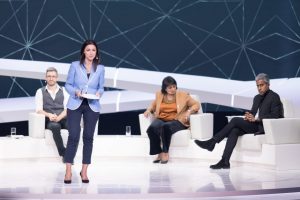 Moderator Ghida Fakhry challenged each speaker’s views, allowing them to dig into their sharply differing philosophies and engage with the costs and benefits of each. Ameenah brought to bear her experience running the economy of Mauritius, whose success she attributes to smart decision-making that put people’s well-being at the center of policy. “When Mauritius gained independence in 1968 the per-capita income was US $200, and 51 years later we are just under $10,000,” she said. “How we managed to do this has been through a series of very strong decisions taken, but more importantly, we have learned up front to distribute the wealth.” Thirty percent of the GDP is reinvested, with Mauritius providing free education and health care. 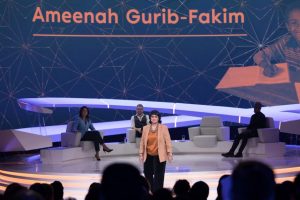 “Without growth, there can be no sustainable development.”

Jason emphasized that his case for a post-growth model is aimed at wealthy countries, not poorer developing countries (like Mauritius was when it embarked on its successful growth decades ago). “My argument is not that poor countries should abandon growth, but rather that rich countries should,” Jason said. “Poor countries should absolutely pursue growth that generates the resources necessary to invest heavily in health care and education. But growth should not be the objective in and of itself, in perpetuity.” Growth should be funneled into certain sectors that benefit more people, he said, and rich countries that have “deeply catastrophic” levels of resource consumption “must scale down their impact on the planet to create space for others to thrive.” 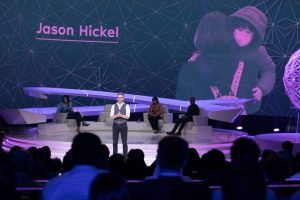 “Justice is the antidote to growth.”

Anand shifted the conversation away from “all-or-nothing capitalism,” arguing that a black-and-white understanding plays right into the hands of extreme capitalists. “This is a rhetoric that comes from Wall Street: ‘You either leave us alone to practice manic hyper-capitalism, and every 10 years we’ll tank the world economy — either you leave us alone to do that or you get your light-rail, and your light-rail and your government programs will lead you directly to the gulags.’” The reality, Anand said, is that there are many variations of capitalism, presenting a range of choices about the kind of capitalism we can have. “Capitalism is like any other social force. It needs to live nestled among other forces that have a healthy counter-pressure.” 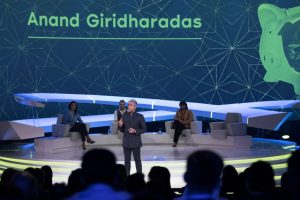 “There is a solution. It’s called democracy.”

Jason pushed back, arguing that all types of capitalism require perpetual growth. He pointed to the Intergovernmental Panel on Climate Change — which lays out scenarios to reduce emissions consistent with the carbon budget for 1.5 or 2 degrees Celsius — espousing the need for rich nations to decrease emissions, which can’t happen if they continue to grow.

Anand wanted to move away from equating all growth with bad growth, an idea that Ameena agreed with. She highlighted the green sector, positing the possibility of good growth through renewable energy. Governments, she said, must act as arbiters of growth, both to channel it in a positive direction and avoid financial collapse like the 2007–2008 crisis.

Jason challenged them to address the ecological elephant in the room: How does growth — even green growth — reverse planetary devastation that any growth causes? “Even if we power the existing growth-based economy with renewable energy,” he said, “it would still be driving those consequences of climate change, species extinction, ocean acidification, soil depletion,” and a host of other grave consequences. Even the best version of capitalism, he argued, results in extreme ecological devastation. There is scientific consensus that we can flourish in a post-growth society. “This is not an academic question,” he said, “but one we have to pose politically.” 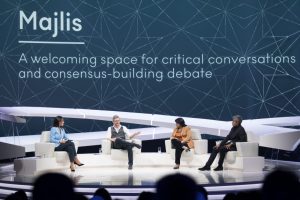 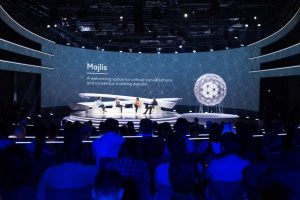 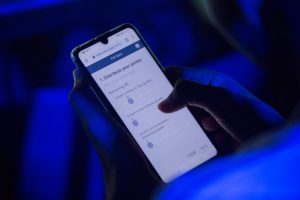 The debate was livestreamed on Facebook and Twitter, where viewers voted on whose approach they agreed with and asked questions, announced by debate correspondent Nelufar Hedayat. The tweets expanded on the conversation, pointing to the need for government oversight, all seemingly agreeing on the harm of a kind of capitalism that enriches the few at the expense of the many.

Govinda Clayton, a senior researcher in peace processes within the Center for Security Studies at ETH Zurich, and the debate’s bridge-builder and “connector,” focused on moving away from positions and toward underlying interests. Each expert shared an interest in tackling inequality and avoiding environmental catastrophe. Govinda called on everyone to shift the debate away from whether growth is good or bad, and toward solutions for inequality and ecological collapse.

The deeply personal nature of capitalism was reflected in the audience’s questions, with students pointing to the fact that governments are often in the pockets of corporations; challenging the role of countries whose tax policies allow them to be tax havens; and asking whether ethical consumerism under capitalism is possible.

Bursts of applause scattered throughout the debate, showing enthusiasm for the anti-capitalist preaching of US presidential candidate Bernie Sanders, and especially for Anand’s response when the moderator asked why billionaires and corporations would rein in a system they have benefited from: “We don’t need them to rein it in, we need to rein them in,” he said.

The engagement was also reflected in audience polling, which took place at the beginning and end of the debate. At first the audience agreed mostly with Anand’s call for reining in capitalism, but at the end, polling showed a dramatic shift, with the audience agreeing far more with Jason’s vision of a post-growth world. 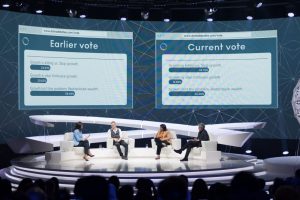 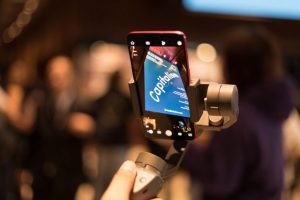 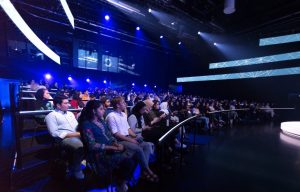 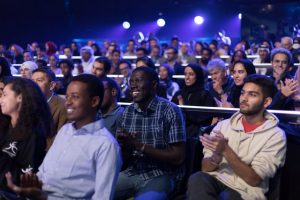 The debate ended as constructively as it began, as a conversation, not a contest, and an example of how different visions can intersect to reveal shared values and common goals. The debate continues @DohaDebates right now with the hashtag #DearWorld. Mark your calendars for our next live debate, on November 12, on the topic of loss of trust in governments and institutions, from the Paris Peace Forum in France. 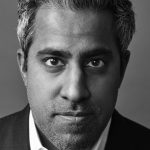 Jason Hickel
Anthropologist at the London School of Economics