Our second virtual debate took on a particularly wide scope with questions about global institutions and global cooperation: Are our existing institutions strong and reliable enough to guide us through our biggest challenges? Or does this new era require fully reimagined institutions? As the pandemic continues to decimate world economies and global health, it also continues to reveal the deep inequalities between the global north and global south. Post-WWII institutions like the United Nations, the World Bank and the International Monetary Fund (IMF) were arguably founded on the basis of protecting the interests of the world’s richest countries. As we stand at the 75th anniversary of the United Nations, Doha Debates looks beyond that to ask what the future of global institutions should look like. This debate brought together Leymah Gbowee, Ece Temelkuran and Yanis Varoufakis, along with a virtual panel of international students and other young people to vote on the speakers’ positions and ask questions. Learn more about the definitions that drove this debate.

Are global institutions failing us?

The Positions: Reform, reinvigorate or replace?

Leymah Gbowee, a Nobel Peace Prize Laureate and Liberian activist, submitted that while our current institutions are behemoths of bureaucratic red tape and self-interest, the real problem is the individualistic nations that form them. When countries prioritize their own interests, to the detriment of others, we will never have the kinds of institutions we need to guide the world through climate change, the pandemic or other crises. As an example, Leymah pointed out that the G20 (Group of 20), formed in 1999, is finding it very difficult to do the things it was set up to do. Anything new will continue down the same path, and what we need right now are structures that bring together our collective humanity. “The core of any reform should be our collective humanity, not one group against the other,” she said.

“The core of any reform should be our collective humanity, not one group against the other.”—Leymah Gbowee

Ece Temelkuran: Global institutions have lost moral ground. Let’s unite and apply pressure from the outside.

The middle position was argued by Turkish author and commentator Ece Temelkuran, who said that the U.N. and other institutions lost their moral high ground at the start of the war in Iraq. “The power vacuum left by the failure of these institutions is now filled by global leaders with fascist inclinations who are making personal bargains for the destinies of the people,” leaving them fundamentally unable to reform themselves. Protest movements around the world, beginning with Tahrir Square and now continued by Black Lives Matter, are reaching out and rising up. To reform global institutions, we must “organize [these] spontaneous expressions of solidarity” into our current institutions.

“The power vacuum left by the failure of these institutions is now filled by global leaders with fascist inclinations who are making personal bargains for the destinies of the people.” —Ece Temelkuran

Yanis Varoufakis: We need new global institutions. Let’s not shy away from starting over.

Greek philosopher and economist Yanis Varoufakis argued that nothing less than fully reimagined and rebuilt global institutions can meet the challenges the world faces today. “This is our conundrum,” he said. “Never before have we needed global governance more, [and] many see the United Nations as dysfunctional.” In order to tackle climate change and crushing inequalities, we need new institutions — such as, most urgently, a global organization for emergency climate action, to prevent humanity’s extinction.

“This is our conundrum: Never before have we needed global governance more, [and] many see the United Nations as dysfunctional.”—Yanis Varoufakis

Moderator Ghida Fakhry introduced the first round of voting by our international panel of students, watching and participating virtually. Leymah and Yanis’ positions were very close, garnering 36.87% and 39.67% of the debate, respectively. Ece’s position earned 23.47% of the vote. 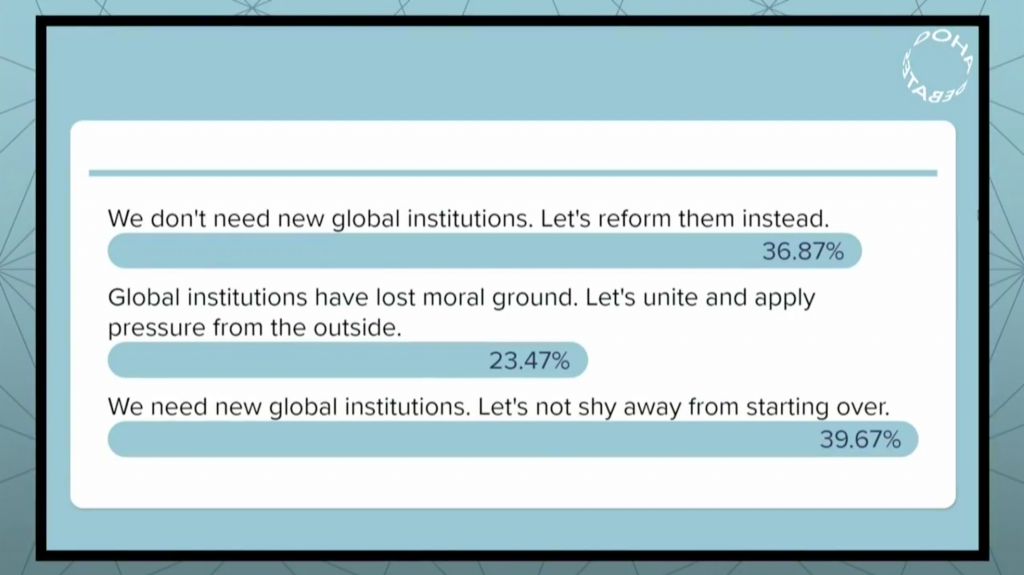 Connector Dr. Govinda Clayton noted that the three speakers were indeed very close in their beliefs. Probing a little deeper, he said that most of the consensus was focused on the broad understanding that yes, our institutions do require change — none of the speakers argued that our current systems are functional. He challenged them to find points of consensus on what new institutions would look like — and what might inspire younger people to make the reforms necessary to achieve a more functional global society.

“What vision might inspire younger people to make the reforms we need?”—Dr. Govinda Clayton

Ghida asked Leymah, who led a women’s peace movement that helped end a civil war, whether replacing the global institutional leaders with women would be sufficient reform. Leymah pointed out that we have yet to see women leading peace negotiations, so despite the U.N.’s many policies around gender equality, the fact that there has yet to be a woman Secretary-General indicates a lack of true reform. As for solutions, Leymah said that it’s time to shift the way the U.N. Security Council is conducted. Rather than having five permanent members, whose consolidated power overshadows the rest of the world, membership should be rotational, with every nation having an equal vote.

Yanis agreed that although we need to see more women at every level of government, the real problem is that the existing infrastructures don’t have a path forward. “$750 trillion of fictitious capital is doing the rounds in world markets. A tiny amount of that could be diverted to equality, climate change and education. None of our institutions can do that. The IMF takes from the poor and gives to the rich. … We need new institutions and systemic change.”

Correspondent Nelufar Hedayat fielded questions from our online audience, whose questions indicate the scope of the challenges that younger people are already facing in today’s world.

Leymah’s response was to the point: “Technically we are already at war.” The coronavirus pandemic has made countries turn inward and focus on themselves, to the detriment of global cooperation. “The U.N. is as strong as its member states,” she said. If they conduct business as usual, the world will continue to find itself in the place we are today, whether we have our old institutions or new ones.

“Technically we are already at war.”—Leymah Gbowee

Yanis said that we already know what needs to be done to mitigate climate change — the question is who determines the pace and direction of change. We know we need to rely on hydrogen and renewables, and that we need to quickly move away from the extraction of fossil fuels. Even without taxing Western countries, there is still enough money to fund and coordinate such efforts, to create a public financial instrument that shifts huge amounts of money from global north to global south, elevating poor people from poverty.

Ece said that protest movements, from Cairo to Minneapolis, are already connected. We must assemble them and occupy the institutions where decisions are made. We have to redefine power in a way that is less easily corrupted.

Twenty or 30 years ago, Leymah said, the U.N. was still functional — not because the institution was fundamentally different, but because we had leaders around the globe who were interested in humanity and in a global community. Today, we have too many world leaders whose primary interest is power. But focusing on individual countries won’t do us any good in the long run.

Yanis added that progressives, especially in the EU and U.S., must work toward reframing our international institutions. It’s only a minority of Americans and Europeans who even benefit from the exorbitant price and privilege of the dollar. “It’s about an oligarchy without frontiers,” he said. COVID had only benefitted nationalism. 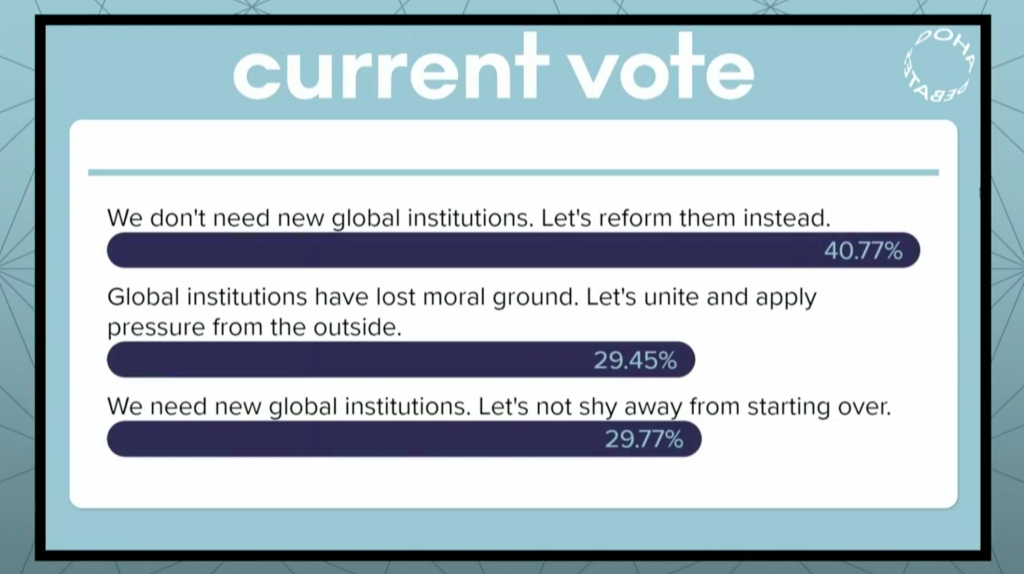 Leymah’s final statement was a passionate call to young people to rely on their collective humanity when reshaping their future. Get interested in the political life of different nations and remember the importance of interconnectedness, whether we’re talking about peace, climate change, education, justice or health care.

Ece said that she’s proud of young people, who have already realized that democracies are being hijacked by populists. We can build a better world right now, but we need to refresh our faith in humankind and in ourselves. If our global institutions are a sunken ship, we must all occupy it together to rebuild and transform it into a living organism.

Yanis similarly congratulated young people around the world for their role in climate strikes and the Black Lives Matter protests. But we need to go beyond protest, he argued — we’ve seen waves and waves of protests in the last decade, and they eventually fizzle out. If we are going to mobilize $10 trillion for the good of humanity, we need a common plan. The bankers, the populists, the xenophobes and nationalists, the racists — they already have a plan, one that benefits only themselves.

With nearly every country in the world further destabilized by the effects of the pandemic, it’s clear our global institutions aren’t up to the task of persuading an increasingly number of authoritarian leaders to consider the global collective good. On this point our speakers all agreed.

Whether you believe the future of our institutions can be saved by reform that centers our collective humanity, whether we must apply grassroots pressure to reform from the outside or whether we need to fully reimagine and rebuild, Doha Debates wants to hear from you. Join us on Twitter, Facebook and Instagram to share your thoughts and continue the conversation.

Speakers in the debate 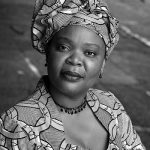 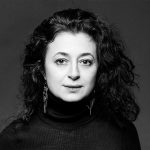 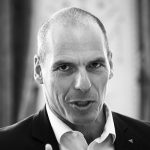