When Doha Debates decided on “globalization” as our debate topic, we knew it would be ambitious — the term is used so widely as a catchall that many people aren’t sure of its exact definition. But the results of our debate revealed powerful perspectives that confirmed the value of the conversation and raised an urgent question: Can we tackle hugely complex global challenges? Do our voices and personal actions make a difference when large forces are at play? Globalization, like the act of debating, is a test of that process. It’s an experiment in collaborating. But collaborating to some ears means colonizing, exploiting and excluding. Who gains and doesn’t under globalization is the question that our speakers explored passionately on the debate stage in Edinburgh, Scotland.

Globalization is the interconnectedness of people, products, economies and governments. But its meaning is a moving target, acknowledged upfront when author Parag Khanna argued for globalization as the “greatest force for reducing poverty” for billions of people. Activist Medea Benjamin sharply disagreed, saying globalization is a driver of corruption, abuse and inequality. Writer Sisonke Msimang asked everyone to ditch abstract jargon — the language of “globalese” — and take specific action in our own lives to create change.

Their arguments overlap — depending on which aspects of globalization we’re talking about. Moderator Ghida Fakhry narrowed the focus by asking for common ground. The speakers searched for it, agreeing that the speed of the world’s interaction is rising, and the urgency of problem-solving is growing. 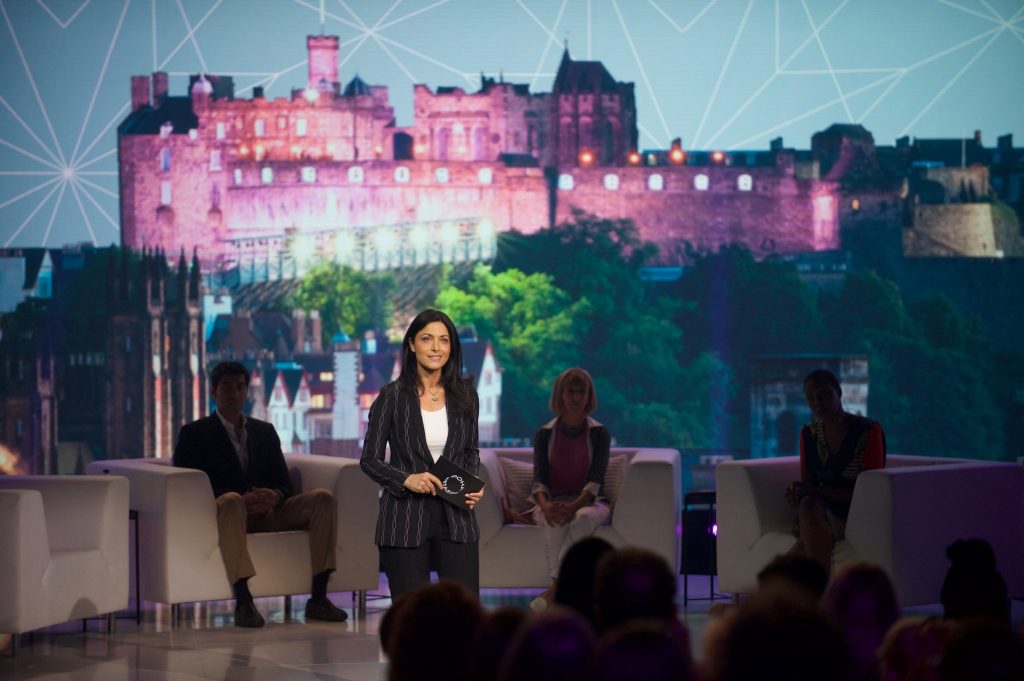 A production of Qatar Foundation and presented in connection with TEDSummit, the debate got a running start from correspondent Nelufar Hedayat, who read viewers’ tweets before Parag took the stage and praised globalization. The bestselling author contended, “There is no bad globalization. There is only badly managed globalization,” and that any failures of globalization are human failures, not systemic ones. Globalization is a neutral tool and a net positive.

“Globalization doesn’t fail. We do,” he said. “The solution to the negative consequences of globalization is always more globalization of the positive” kind, like sharing resources and products more, not less, and making work conditions safer and more accountable, not less.

“Globalization is our future. Let’s get smart and make the most of it.” 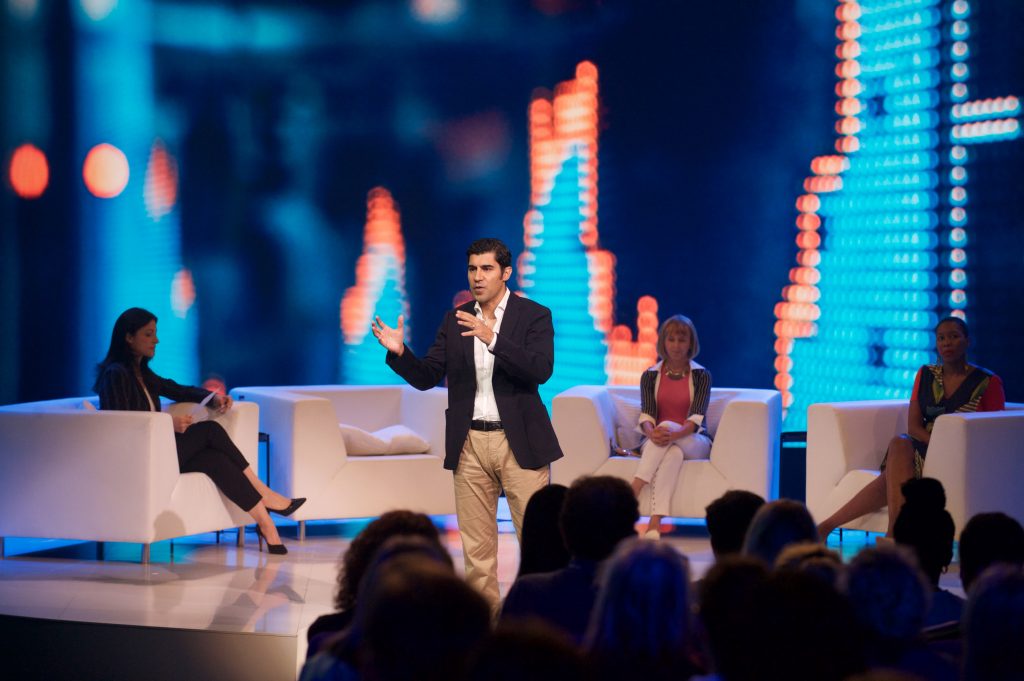 In Ghida’s follow-up, she challenged his optimism, calling Parag’s stance “an interesting attempt at deflection,” and “a positive spin” on the “human cost.”

“Globalization has enabled” corruption, Parag conceded, “but it’s not globalization’s fault” — it’s the fault of government officials who abuse globalization’s opportunities. “Blame yourself!” he added, speaking generally about taking responsibility.

Medea had the mic next, building her case against the “blame yourself” line of argument. She called globalization a “corporate-led, undemocratic and unfair” system. “It gives too much power to these multinational corporations…They destroy so many local businesses,” said the activist and founder of Codepink. “Globalization has been disastrous for the environment…Yes, it brings cheap goods, but many of these companies don’t even pay taxes.” 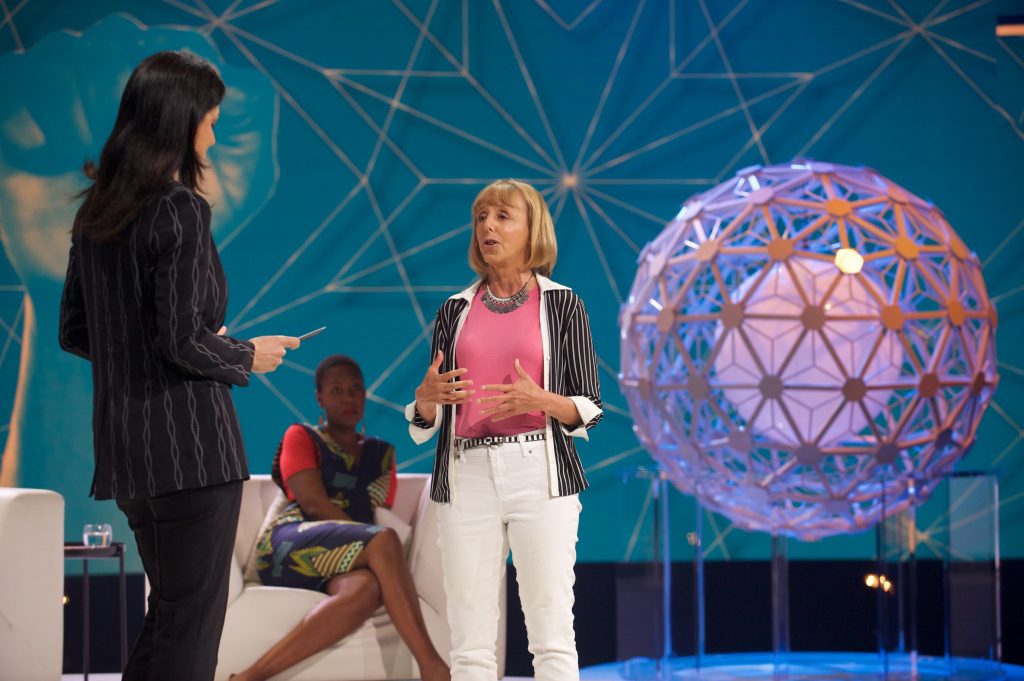 “Corporate-led globalization is undemocratic and unfair.”

A solution, Medea proposed, is an alternative “system that’s not driven by corporate profits but focuses instead on creating well-paid, meaningful jobs,” and that “puts the stewardship of the environment front and center.”

As a concrete action, Media said, “Let’s all take one very simple step: Let’s go strawless.” She held up an unrecyclable plastic straw of the kind that’s increasingly criticized around the world. 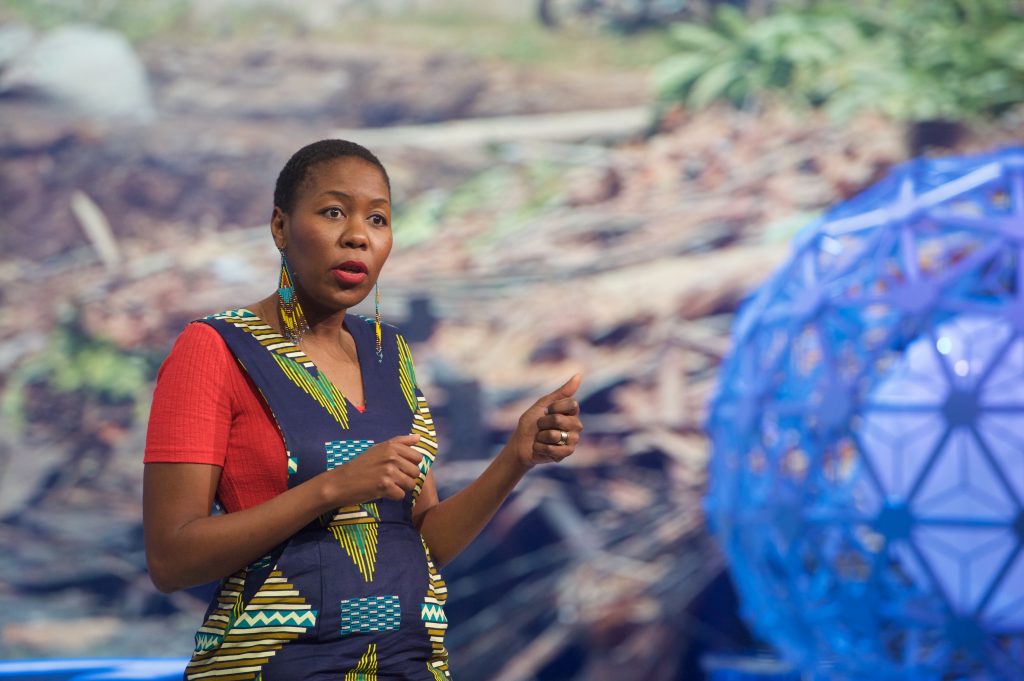 The debate turned to the topic of language and power when Sisonke, pulling from her experience as a writer, asked everyone not to “hide behind jargon.” “Dropping the ‘globalese’ would make it a lot easier to have more honest conversations.”

“No matter where you live, talking about your hopes and fears is a far better starting point than talking about this abstract thing called globalization,” she said.

“The words trap us. I’m more interested in removing the labels and finding new, more clear, more direct, more honest language.” Her first suggestion: “Change things you don’t like” in your immediate circle of influence.

The debate was livestreamed, with viewers getting spotlights when Nelufar, the correspondent, read their comments. 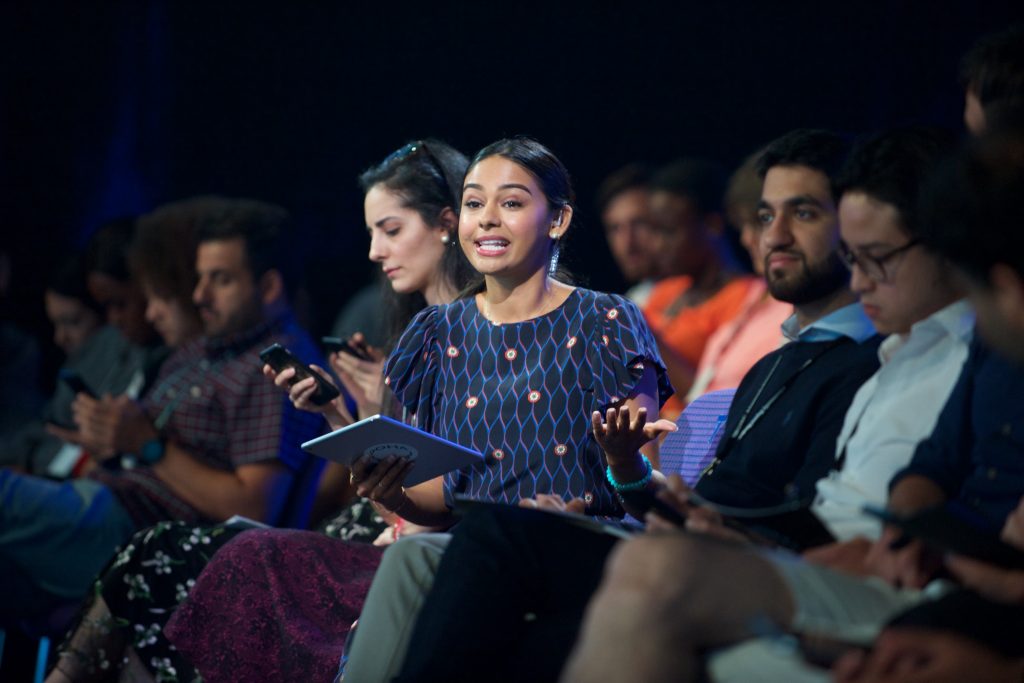 Hundreds of livestream votes flowed throughout the debate: 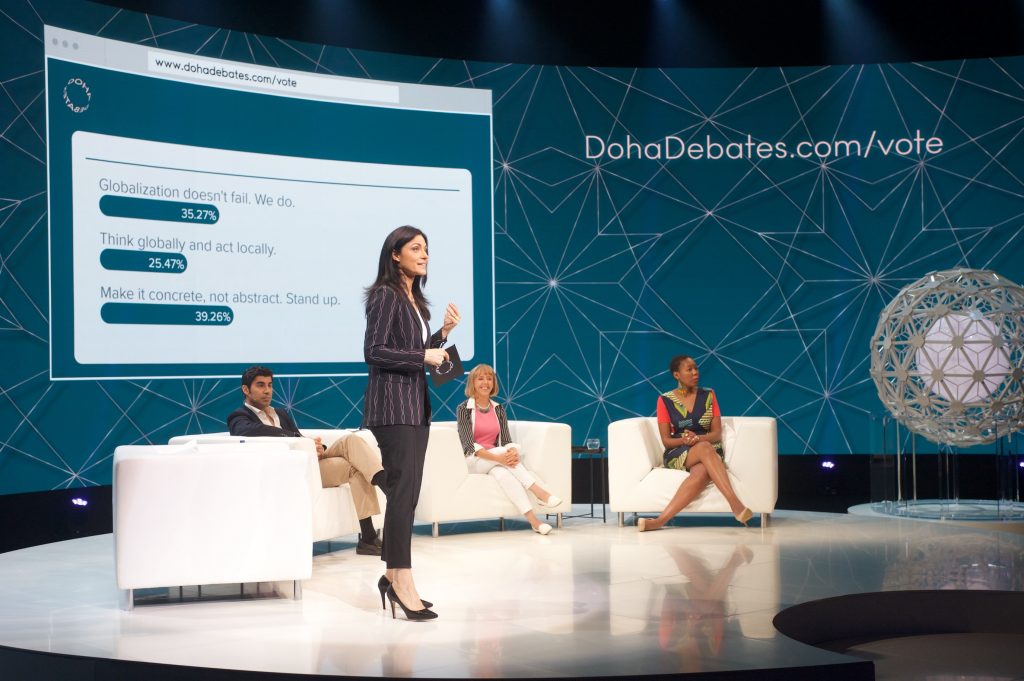 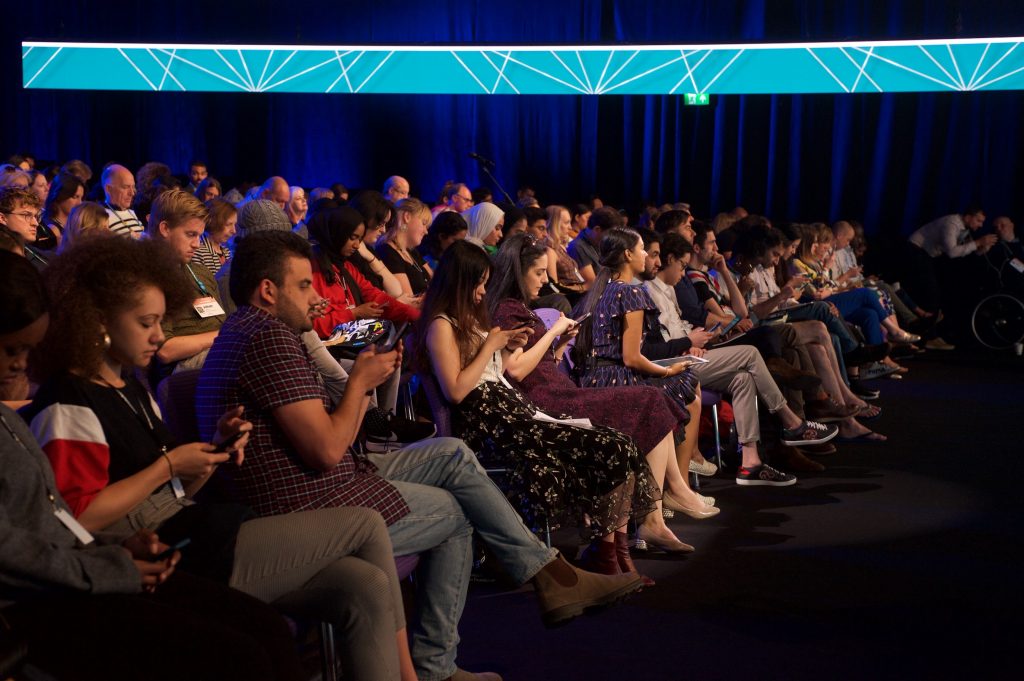 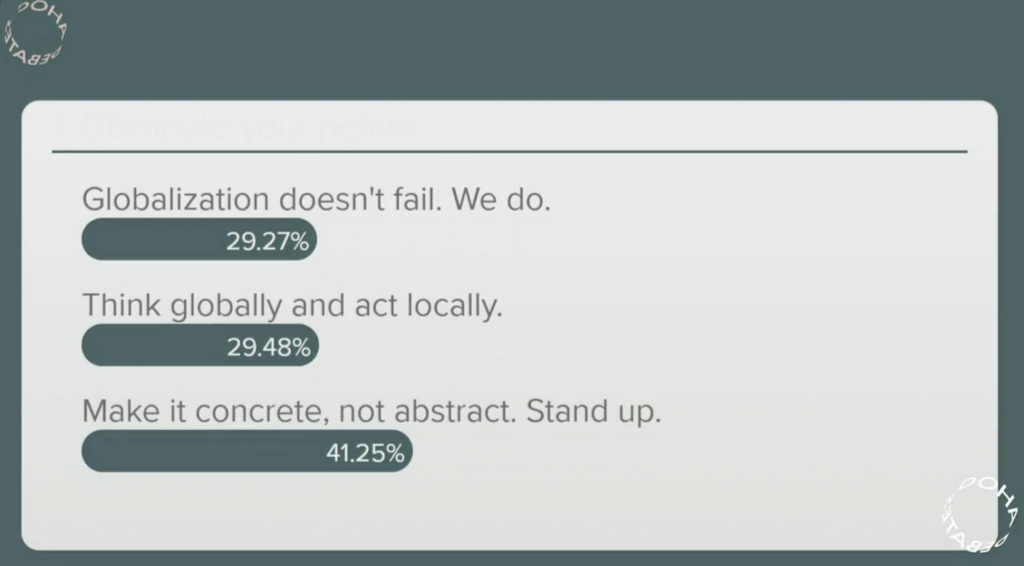 Finding common ground was the goal of Govinda Clayton, the next speaker, who serves as Doha Debates’ connector, a bridge-building mediator who carves out consensus. 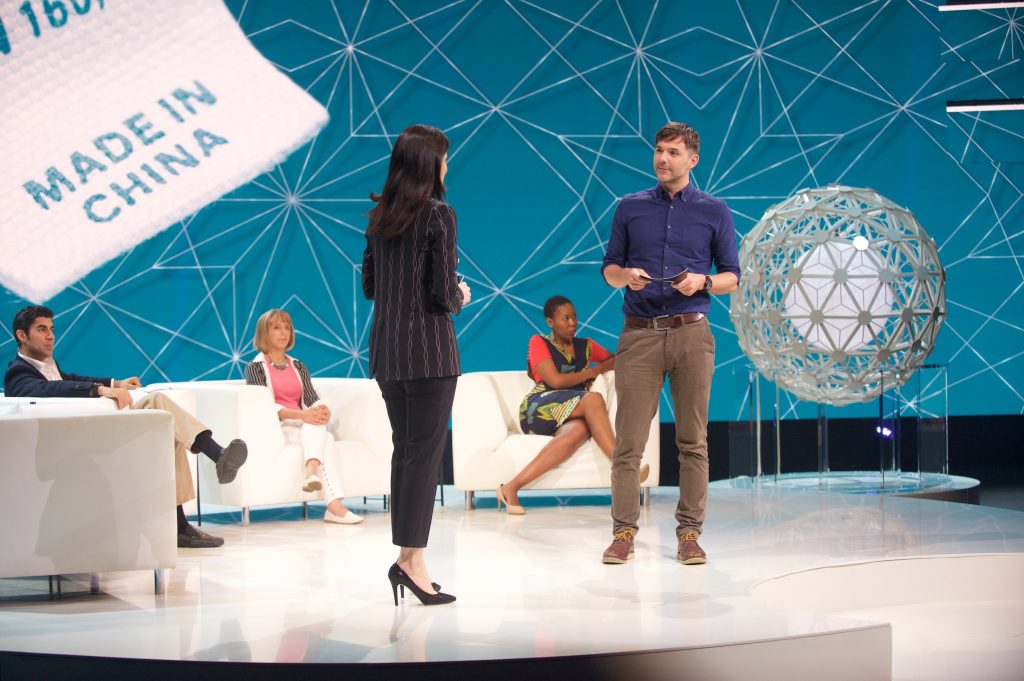 As a conflict resolution expert, Govinda reminded the crowd that conflict “can be a really creative process” and “a good thing!” “Conflict can promote internal growth and collective growth” as long as it doesn’t turn destructive or violent. He steered the speakers by cautioning that we risk “talking past rather than to each other.”

In the Majlis portion of the debate — a segment for solutions — Sisonke acknowledged that “we can’t wish away multinational corporations,” but we can take a common step: “Find one specific thing that bugs you in your community and do something about it.” 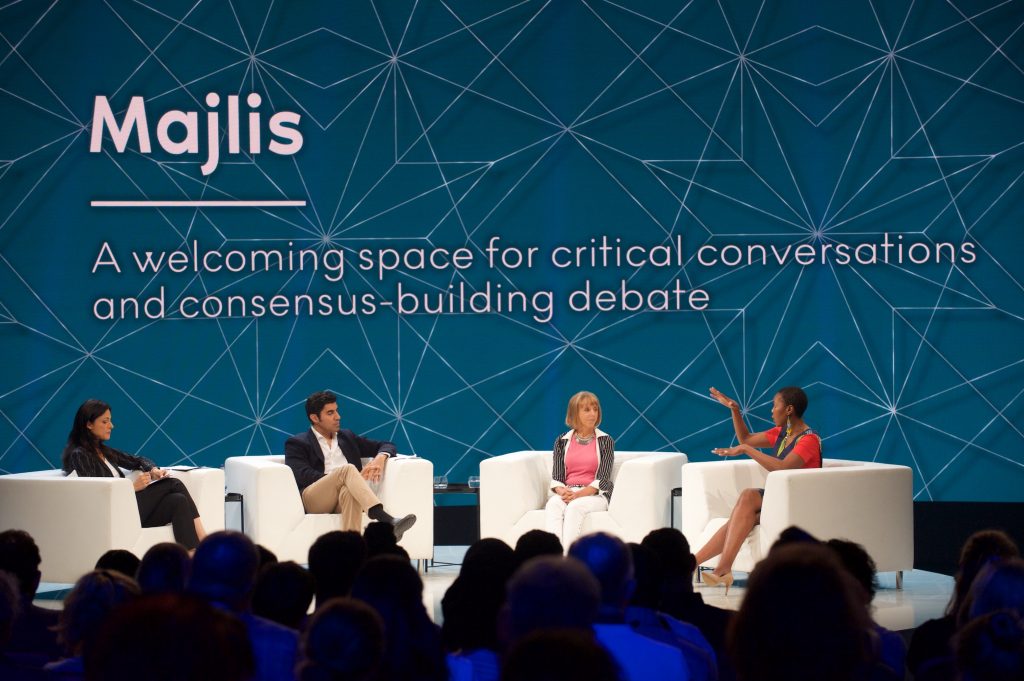 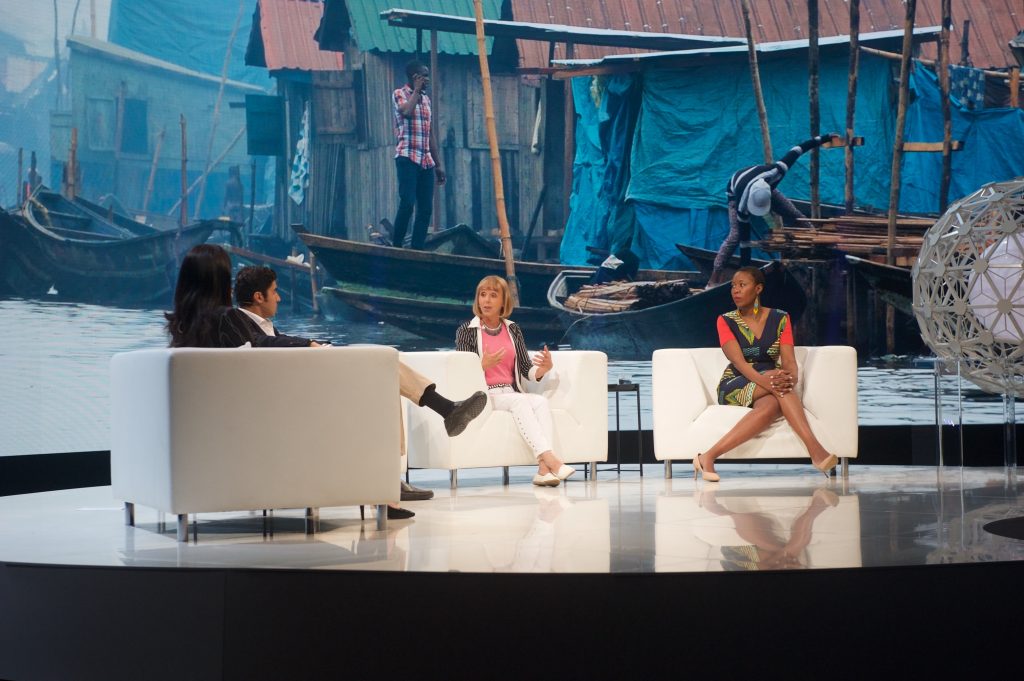 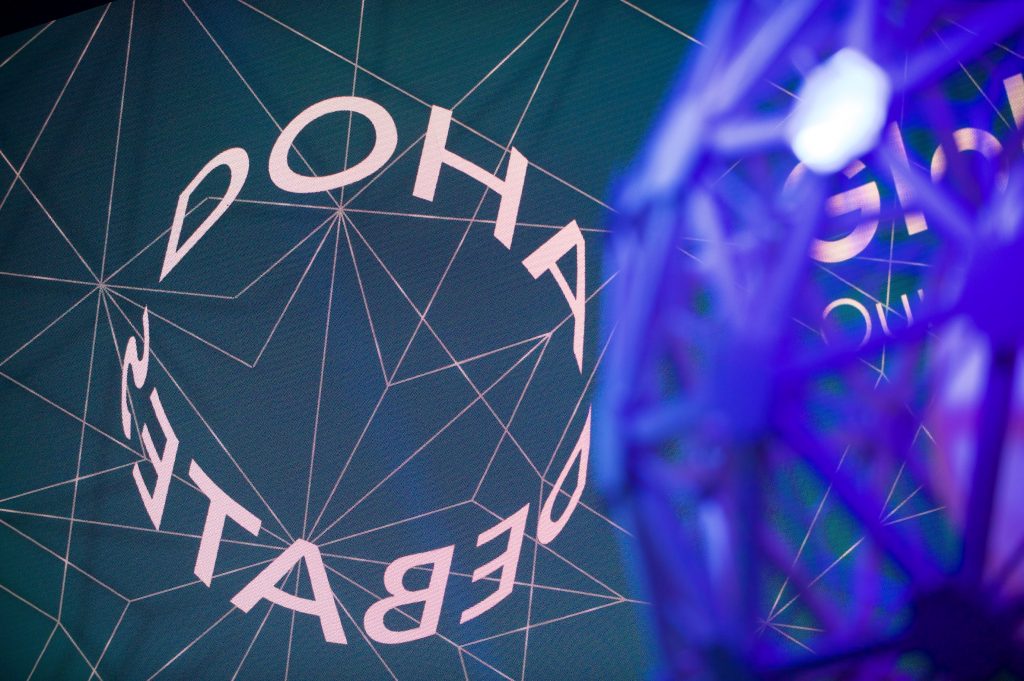 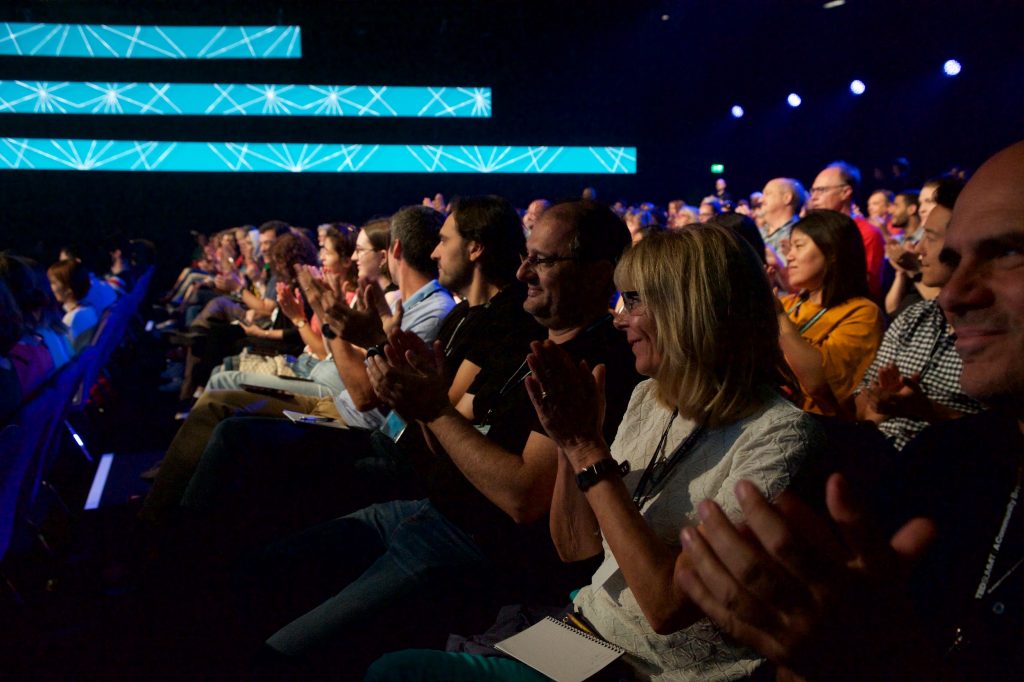 The debate ended as constructively as it began, as a conversation, not a contest, and an illustration of how conflict can be an engine for productive dialogue. The debate continues @DohaDebates right now with the hashtag #DearWorld. 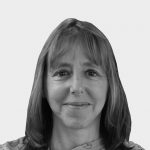 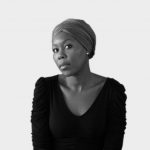