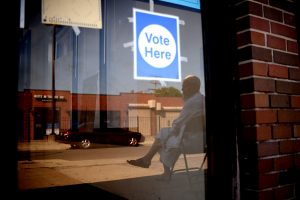 In 2015, Hamtramck, Michigan, a formerly majority Polish Catholic city, became the first Muslim-majority city in America. During election season, its new majority aims for representation in city hall. Hamtramck, USA follows the campaigns of Fadel al-Marsoumi, a young Iraqi immigrant running for city council, and Karen Majewski, the first female mayor in Hamtramck’s 100-year lineage of Polish mayors. Throughout their campaigns, Karen and Fadel try to build support across ethnic and religious lines.

Doha Debates is an impact producer on Hamtramck, USA.

Rent or purchase the film via ProjectR or iTunes, or watch it on Apple TV+.

Doha Debates and the Hamtramck, USA filmmakers have developed educational resources for teachers and other educators to use the film in the classroom. Download a quick lesson plan (for one 90-minute class) or the full curriculum (for four 90-minute classes).