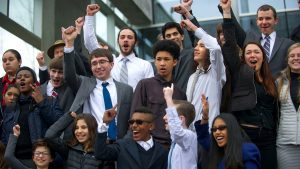 From Doha Debates and the Points North Institute

Fighting for justice and inequality

During the month of April, together with the Points North Institute, Doha Debates is hosting a series of four film screenings of short and feature-length documentaries that address injustice and inequality. These fully virtual screenings highlight individuals and communities who are working to fight for a better future.

Each Thursday in April, Doha Debates is hosting a facilitated discussion from noon – 1:30 p.m. ET with filmmakers, film protagonists and other special guests. These interactive discussions will explore story-driven strategies for social change, including how to find agency to address inequity and injustice. The series features a total of 12 nonfiction films, including several that are previously unreleased. A limited number of tickets will be available to participants on April 1 at SolutionsCinema.com.

Each of the four curated programs includes a film screening and a moderated conversation with filmmakers, people featured in the film and public figures. The screenings are organized by theme: Power to the People, The Ground Truth, No Planet B and A Year of Reckoning.

It is free to participate in Solutions Cinema! Screening tickets will be available beginning April 1 on SolutionsCinema.com. You will be able to watch the film(s) on your computer, or through the Eventive app on your AppleTV or Roku. If you have a question, problem connecting, or to find out more about system requirements, please see the Eventive FAQ.