Listen now, wherever you get your podcasts.

On The Long Game, we highlight stories of courage and conviction on and off the field. From athletes who are breaking barriers for women and girls to a Syrian refugee swimmer who overcame the odds to compete at the Paralympics, The Long Game examines the power of sport to change the world for the better.

The Long Game, a co-production with Foreign Policy, is hosted by Olympic medalist and trailblazer Ibtihaj Muhammad, who takes you around the globe to meet athletes fighting for change.

A Syrian Paralympian who competes for all refugees

Ibrahim Al Hussein grew up in Syria watching the Olympics on TV. He was a swimmer, and he dreamed of someday being one of the athletes up on the podium. But at age 22 — the age at which many swimmers are in their prime — he lost his leg in a bomb blast, and became one of the 5.6 million people who have fled Syria since the start of the Civil War. Ibrahim still hasn’t been able to return to his home country, but in 2016, he became one of two Paralympians to compete in Rio as part of the Refugee Olympic team — a team formed by the International Olympic Committee in response to the number of stateless athletes looking for avenues to compete at the Olympics.

Mohamed Salah changed attitudes. Other athletes can too.

Mohamed Salah is one of the best forwards in the English Premier League, which has a reputation for racism and Islamophobia. Since Mohamed, a Muslim, has joined Liverpool, Islamophobia in the surrounding area has dropped significantly. Social scientists are studying how athletes can change attitudes.

When she was just an infant, Scout Bassett lost her right leg in a fire. She lived in an orphanage in China until she was almost 8 years old, when she was adopted and brought to the United States. But Scout’s struggles were just beginning, and it wasn’t until she was fitted with a running prosthetic that her life really began to change.

From a war zone to the FIFA boardroom, a female footballer finds her way

Honey Thaljieh grew up in a Palestinian battle zone. One day, on the streets of Israeli-occupied Bethlehem, a group of boys playing football (or American soccer) happened to pass her the ball. Soon, Thaljieh discovered that she was a gifted athlete. But more than that, football became Thalijeh’s path to freedom, dignity and fame. In 2003, Thaljieh co-founded the Palestinian Women’s National Football Team and was named its first captain. Now retired from competition, Thaljieh works as a manager of corporate communications for FIFA, supporting projects that promote gender equality, life skills, health, education and peace through sport.

The 1995 Rugby World Cup marked the end of apartheid and South Africa’s return to the international sports stage. The home team, the Springboks, weren’t expected to go far. Instead, they won it all. And if that sounds to you like the kind of thing Hollywood would make a movie about, you’re right. It’s the story at the center of Invictus, the 2009 film directed by Clint Eastwood and starring Morgan Freeman and Matt Damon. The movie ends with Nelson Mandela being driven away from the stadium in Johannesburg, his car surrounded by overjoyed fans. But the true impact of that day — and that game — is still felt in South Africa today.

“I never felt more like myself”: A professional basketball player’s hijab journey

As a college basketball player, Batouly Camara made three Final Four appearances with the University of Connecticut. She’s the daughter of immigrants, a children’s book author and she’s founded her own nonprofit to help women and girls get access to sports and education. And if that’s not enough, she’s also one of the first Muslim women to play professional basketball in hijab.

Mega-sized sporting events — including the 2022 Qatar World Cup — often bring with them a spotlight and intense international scrutiny of whatever problems plague the host nation. But what happens when the circus leaves town and the spotlight goes dark? Can mega-event activism actually lead to lasting change?

Cricketers lead the way for India and Pakistan

In the 1980s and 1990s, “cricket diplomacy” was seen as a way to mend fences between neighboring India and Pakistan. But as relations between the two countries worsen, their long-standing cricket rivalry is changing. And now, after an unexpected showing at the 2021 Cricket World Cup, some fans are hoping the Pakistan team can help bring their country back to the international stage.

Friba Rezayee was the first woman to compete for Afghanistan in the Olympics. Since then, she’s worked tirelessly to support Afghan women in sports and education. Her mission is to help create her country’s future leaders. But now that the Taliban is back in power, what’s to become of Friba’s dream of gender equality in Afghanistan?

The Long Game: A conversation with Ibtihaj Muhammad 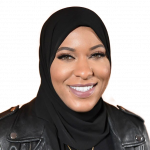