by Laura M. Browning
A public cemetery in Jakarta, Indonesia, which is rapidly sinking due to climate change and political inaction. Photo: Afriadi Hikmal (Getty Images)
Part of the topic 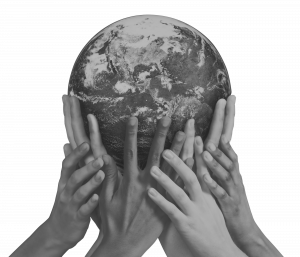 Climate change, climate justice, climate colonialism. What do these terms mean, and how do they inform different approaches to solving climate change?

Climate change is one of the most talked-about issues on the planet, yet conversations about it often rely on scientific terms and jargon. The UN defines it simply: “long-term shifts in weather patterns.” But of course its causes and effects are far more complex — and so is the language surrounding it. And, as a recent small study showed, even though climate-related terms like “net zero” are frequently used in the media, many of us don’t have a clear grasp of what they actually mean. In this article, we’ll break down a few of the more commonly used terms around climate change, and we’ll introduce a few new ones that you might hear during Doha Debates’ climate change debate on November 4.

Where it all began

Though it may seem like a recent phenomenon, climate change is rooted in the mid- to late 1700s, when technological advancements in Britain and Belgium heralded the first industrial revolution. Mechanized spinners enabled mass textile production, agricultural technology evolved to use power tools, iron and steel became commonly used and, most significantly, people began using resources like coal and water to fuel these new technologies.

Coal, along with other resources like petroleum, natural gas and heavy oils, is a fossil fuel that forms when fossils and other organisms break down in the Earth’s crust. Extractive industries — like coal, oil and gas — locate, develop and distribute these raw materials. Burning these fossil fuels releases gases like carbon dioxide, methane and ozone into the atmosphere, where they trap the sun’s heat the way the glass roof of a greenhouse does — hence the term greenhouse gases, though “carbon emissions” is commonly used as shorthand for all greenhouse gas emissions.

From the 1700s to the mid-1900s, industrialization crept across Europe and then spread more rapidly around the world, introducing mass food production, widespread electricity and plumbing, sweeping political and economic changes — and the first significant carbon emissions caused by human activities.

In October 1854, the magazine Scientific American published a short piece questioning whether cutting down forests to grow more crops might be having an effect on climate — and although the unnamed writer believed it was unlikely, suggesting that the real culprit could be magnets in the Earth’s poles, they also noted that observed changes in the climate were serious enough to merit an “important inquiry.” This article, the first written use of the term “climate change” in English, was immediately followed by a report on coal prices in the U.S. state of Ohio — noting that coal is a much cheaper fuel than wood, and that “the Ohio coal field embraces an area of 12,000 square miles, and is really more valuable than the same extent of gold.”

Today we understand, unequivocally, that human actions — like mass deforestation, large-scale manufacturing, cattle farming and more — release heat-trapping gases into the atmosphere. The Sixth Assessment Report by the Intergovernmental Panel on Climate Change (IPCC), the UN’s body for climate assessments, warns that we are in danger of reaching or exceeding global warming of 1.5°C within just 20 years.

That kind of temperature increase is staggering — especially considering the Earth’s built-in defenses against climate change. Many natural resources form carbon sinks, absorbing billions of tons of carbon dioxide (CO2) that would otherwise be released into the atmosphere. The world’s forests absorb 1.5 times as much carbon as the entire United States emits each year, and our oceans absorb a third of all carbon emissions. Still, in the last 171 years, we have increased the amount of CO2 in the Earth’s atmosphere by almost 49%, enough to raise the average global temperature 1.1°C (2°F). And just that one degree of difference has had devastating effects: Some regions, like the Middle East and American Pacific Northwest, are seeing extreme heat waves unlike anything else in recorded history; other areas, like Madagascar, are verging on severe famine conditions caused by climate change.

“Net zero” refers to balancing the CO2 emissions that we put into and take out of the atmosphere, and implies a reduction in emissions. “Carbon neutral,” meanwhile, is similar but not identical: It implies offsetting current emissions, but does not necessarily include strategies to reduce emissions.

“Going net zero” or “reaching carbon neutrality” requires policies at a global scale that regulate climate action in two broad ways: Climate change mitigation refers to actions that reduce and avoid CO2 emissions, such as using renewable energy — which harnesses replenishable natural resources like sun, wind and rain to provide power — rather than relying on finite fossil fuels extracted from the Earth. (Of course, resources and technology are still required to produce, distribute and install renewable energy, making it inaccessible to many populations.) Climate change adaptation describes actions that help us adjust to and cope with current and/or anticipated effects of climate change — like planting crops that grow better in changing weather conditions, or equipping firefighters with better technology and resources to combat wildfires caused or exacerbated by climate change.

We’ll talk about two perspectives you’ll hear more about in the debate: market-based approaches and anti-capitalist approaches. In theory, these approaches are mutually exclusive, since one requires capitalism and one rejects it, though some climate activists and policymakers may borrow ideas from both.

Market-based approaches to climate change use capitalist infrastructure to incentivize the biggest carbon emitters to switch to cleaner energy and reduce their emissions over time. Governments may, for example, set a carbon tax per ton of carbon emissions; private companies then use their own research and innovation to reduce emissions and avoid the additional taxes. Another approach is to create cap-and-trade policies, which set a limit on carbon emissions and then create a marketplace where emitters can buy an allowance from other emitters who are under their cap (essentially purchasing the right to emit more carbon without raising levels overall). Usually, caps decrease over time, creating more incentives for companies to switch to cleaner technologies.

Some climate activists argue that capitalism itself — fueled by fossil fuels and profits — is the root cause of the climate crisis; therefore, market-based approaches will only perpetuate climate-related human costs like migration or the loss of food supplies and livelihoods. From this anti-capitalist perspective, climate change is an intersectional problem that requires an intersectional response. “Climate justice,” a relatively new term that’s gained traction in the last two decades, acknowledges the disproportionate burdens that climate change has placed on the global south and on many Indigenous communities, communities of color, people with disabilities and lower-resource areas all over the world, including the global north. Working for climate justice means first admitting that neither the financial burdens nor the effects of climate change are experienced equally. For instance, the US is one of the top carbon emitters in the world, yet suffers relatively fewer consequences of climate change. Meanwhile, the Marshall Islands, with a population of 60,000, contribute 0.00001% of global greenhouse gas emissions — yet are in danger of being wiped out of existence by rising sea levels in the next 100 years.

Proponents of climate justice advocate for a just transition, a term that originated in the labor movement, which ensures that a healthy economy and a reduction in emissions can co-exist via mutually beneficial actions — such as training coal workers to transfer their electrical engineering skills to other industries, so that local economies can switch from coal to cleaner forms of power.

Working for climate justice also means dismantling systems of climate colonialism. Historically, colonialism has involved not just the domination of one country or group of people over another, but also the exploitation of people and resources. Climate colonialism describes the same practices in a slightly different context. For example, the global south contains the world’s two biggest rainforests — the Amazon and the Congo — which are being rapidly deforested largely for the benefit of the global north. And although it’s well established that the global south experiences more serious climate effects than the global north does, the vast majority of climate studies are still focused on the global north. To date, of the studies done on the impacts of climate change, some 30,000 have looked at places in North America; by contrast, only 10,000 have looked at Africa, which has twice the population.

The colonialist roots of climate change

How can we slow down or even stop climate change? Livestream our climate change debate featuring Naomi Klein, Bjorn Lomborg and Ameenah Gurib-Fakim for three perspectives on solving the climate crisis. This free, virtual event takes place November 4 at 11 a.m. ET / 6 p.m. Doha.