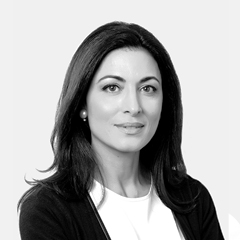 Ghida Fakhry is Doha Debates’ live events moderator and is a current affairs presenter for TRT World. She anchors the network’s flagship political program, Bigger Than Five, from Washington, DC, and serves as its managing editor.

With over 20 years in journalism, Ghida was previously a lead anchor for Al Jazeera English, presenting the network’s Newshour and the award-winning program Witness. She has reported extensively from the United Nations, conducting in-depth interviews with heads of state and other senior international officials. Ghida has moderated high-level panels around the world for the UN and its specialized agencies, the World Bank, and leading NGOs, facilitating debates on political affairs, economic issues, renewable energy, climate change, human rights and gender issues. She is a contributor to HuffPost, writing on US foreign policy and global affairs.

Ghida is a graduate of the School of Oriental and African Studies, University of London. She hold a master of arts degree in Near and Middle Eastern studies. She also holds a master’s in international relations. She is fluent in English, French and Arabic and is conversational in Spanish.